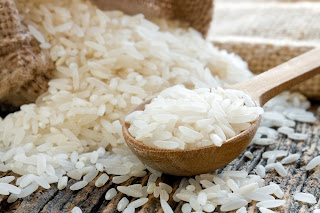 The history of rice cultivation is long and complicated. The current scientific consensus, based on archaeological and linguistic evidence, is that Oryza sativa rice was first domesticated in the Yangtze River basin in China 13,500 to 8,200 years ago. From that first cultivation, migration and trade spread rice around the world – first to much of east Asia, and then further abroad, and eventually to the Americas as part of the Columbian exchange. The now less common Oryza glaberrima rice was independently domesticated in Africa 3,000 to 3,500 years ago. Other wild rices have also been cultivated in different geographies, such as in the Americas.

Since its spread, rice has become a global staple crop important to food security and food cultures around the world. Local varieties of Oryza sativa have resulted in over 40,000 cultivars of various types. More recent changes in agricultural practices and breeding methods as part of the Green Revolution and other transfers of agricultural technologies has led to increased production in recent decades, with emergence of new types such as golden rice, which was genetically engineered to contain beta carotene.

Posted by Richvale Natural Foods at 6:00 AM