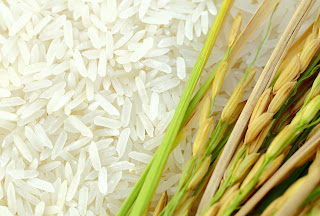 The seeds of the rice plant are first milled using a rice huller to remove the chaff (the outer husks of the grain) (see: rice hulls). At this point in the process, the product is called brown rice. The milling may be continued, removing the bran, i.e., the rest of the husk and the germ, thereby creating white rice. White rice, which keeps longer, lacks some important nutrients; moreover, in a limited diet which does not supplement the rice, brown rice helps to prevent the disease beriberi.

Either by hand or in a rice polisher, white rice may be buffed with glucose or talc powder (often called polished rice, though this term may also refer to white rice in general), parboiled, or processed into flour. White rice may also be enriched by adding nutrients, especially those lost during the milling process. While the cheapest method of enriching involves adding a powdered blend of nutrients that will easily wash off (in the United States, rice which has been so treated requires a label warning against rinsing), more sophisticated methods apply nutrients directly to the grain, coating the grain with a water-insoluble substance which is resistant to washing.

In some countries, a popular form, parboiled rice (also known as converted rice and easy-cook rice) is subjected to a steaming or parboiling process while still a brown rice grain. The parboil process causes a gelatinisation of the starch in the grains. The grains become less brittle, and the color of the milled grain changes from white to yellow. The rice is then dried, and can then be milled as usual or used as brown rice. Milled parboiled rice is nutritionally superior to standard milled rice, because the process causes nutrients from the outer husk (especially thiamine) to move into the endosperm, so that less is subsequently lost when the husk is polished off during milling. Parboiled rice has an additional benefit in that it does not stick to the pan during cooking, as happens when cooking regular white rice. This type of rice is eaten in parts of India and countries of West Africa are also accustomed to consuming parboiled rice.

Rice bran, called nuka in Japan, is a valuable commodity in Asia and is used for many daily needs. It is a moist, oily inner layer which is heated to produce oil. It is also used as a pickling bed in making rice bran pickles and takuan.

Raw rice may be ground into flour for many uses, including making many kinds of beverages, such as amazake, horchata, rice milk, and rice wine. Rice does not contain gluten, so is suitable for people on a gluten-free diet. Rice can be made into various types of noodles. Raw, wild, or brown rice may also be consumed by raw-foodist or fruitarians if soaked and sprouted (usually a week to 30 days – gaba rice).

Processed rice seeds must be boiled or steamed before eating. Boiled rice may be further fried in cooking oil or butter (known as fried rice), or beaten in a tub to make mochi.

Rice is a good source of protein and a staple food in many parts of the world, but it is not a complete protein: it does not contain all of the essential amino acids in sufficient amounts for good health, and should be combined with other sources of protein, such as nuts, seeds, beans, fish, or meat.

Rice, like other cereal grains, can be puffed (or popped). This process takes advantage of the grains' water content and typically involves heating grains in a special chamber. Further puffing is sometimes accomplished by processing puffed pellets in a low-pressure chamber. The ideal gas law means either lowering the local pressure or raising the water temperature results in an increase in volume prior to water evaporation, resulting in a puffy texture. Bulk raw rice density is about 0.9 g/cm3. It decreases to less than one-tenth that when puffed.

Posted by Richvale Natural Foods at 4:00 AM