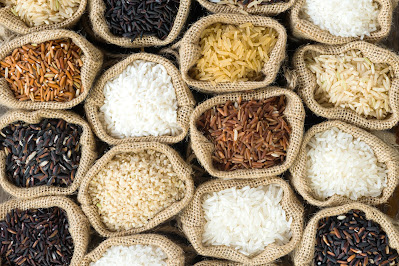 rice, (Oryza sativa), edible starchy cereal grain and the grass plant (family Poaceae) by which it is produced. Roughly one-half of the world population, including virtually all of East and Southeast Asia, is wholly dependent upon rice as a staple food; 95 percent of the world’s rice crop is eaten by humans. Rice is cooked by boiling, or it can be ground into a flour. It is eaten alone and in a great variety of soups, side dishes, and main dishes in Asian, Middle Eastern, and many other cuisines. Other products in which rice is used are breakfast cereals, noodles, and such alcoholic beverages as Japanese sake.

The cultivated rice plant is an annual grass and grows to about 1.2 metres (4 feet) in height. The leaves are long and flattened and are borne on hollow stems. The fibrous root system is often broad and spreading. The panicle, or inflorescence (flower cluster), is made up of spikelets bearing flowers that produce the fruit, or grain. Varieties differ greatly in the length, shape, and weight of the panicle and the overall productivity of a given plant.

In the 1960s the so-called Green Revolution, an international scientific effort to diminish the threat of world hunger, produced improved strains of numerous food crops, including that known as miracle rice. Bred for disease resistance and increased productivity, this variety is characterized by a short sturdy stalk that minimizes loss from drooping. Poor soil conditions and other factors, however, inhibited its anticipated widespread success.

Posted by Richvale Natural Foods at 6:00 AM