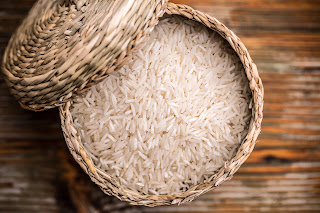 Flood-tolerant rice
Due to the varying levels that water can reach in regions of cultivation, flood tolerant varieties have long been developed and used. Flooding is an issue that many rice growers face, especially in South and South East Asia where flooding annually affects 20 million hectares (49 million acres). Standard rice varieties cannot withstand stagnant flooding of more than about a week, mainly as it disallows the plant access to necessary requirements such as sunlight and essential gas exchanges, inevitably leading to plants being unable to recover. In the past, this has led to massive losses in yields, such as in the Philippines, where in 2006, rice crops worth $65 million were lost to flooding. Recently developed cultivars seek to improve flood tolerance.

Drought-tolerant rice
Drought represents a significant environmental stress for rice production, with 19–23 million hectares (47–57 million acres) of rainfed rice production in South and South East Asia often at risk. Under drought conditions, without sufficient water to afford them the ability to obtain the required levels of nutrients from the soil, conventional commercial rice varieties can be severely affected—for example, yield losses as high as 40% have affected some parts of India, with resulting losses of around US$800 million annually.

The International Rice Research Institute conducts research into developing drought-tolerant rice varieties, including the varieties 5411 and Sookha dhan, currently being employed by farmers in the Philippines and Nepal respectively. In addition, in 2013 the Japanese National Institute for Agrobiological Sciences led a team which successfully inserted the DEEPER ROOTING 1 (DRO1) gene, from the Philippine upland rice variety Kinandang Patong, into the popular commercial rice variety IR64, giving rise to a far deeper root system in the resulting plants. This facilitates an improved ability for the rice plant to derive its required nutrients in times of drought via accessing deeper layers of soil, a feature demonstrated by trials which saw the IR64 + DRO1 rice yields drop by 10% under moderate drought conditions, compared to 60% for the unmodified IR64 variety.

Salt-tolerant rice
Soil salinity poses a major threat to rice crop productivity, particularly along low-lying coastal areas during the dry season. For example, roughly 1 million hectares (2.5 million acres) of the coastal areas of Bangladesh are affected by saline soils. These high concentrations of salt can severely affect rice plants' normal physiology, especially during early stages of growth, and as such farmers are often forced to abandon these otherwise potentially usable areas.

Progress has been made, however, in developing rice varieties capable of tolerating such conditions; the hybrid created from the cross between the commercial rice variety IR56 and the wild rice species Oryza coarctata is one example. O. coarctata is capable of successful growth in soils with double the limit of salinity of normal varieties, but lacks the ability to produce edible rice. Developed by the International Rice Research Institute, the hybrid variety can utilise specialised leaf glands that allow for the removal of salt into the atmosphere. It was initially produced from one successful embryo out of 34,000 crosses between the two species; this was then backcrossed to IR56 with the aim of preserving the genes responsible for salt tolerance that were inherited from O. coarctata. Extensive trials are planned prior to the new variety being available to farmers by approximately 2017–18. When the problem of soil salinity arises it will be opportune to select salt tolerant varieties (IRRI) or to resort to soil salinity control.

Soil salinity is often measured as the electric conductivity (EC) of the extract of a saturated soil paste (ECe). The EC units are usually expressed in decisiemens per metre or dS/m. The critical ECe value of 5.5 dS/m in the figure, obtained from measurements in farmers' fields, indicates that the rice crop is slightly salt sensitive.

Posted by Richvale Natural Foods at 6:30 AM