If You’re Not Eating Rice for Breakfast, You Should Be

Fry it with bacon and eggs for the ultimate savory meal. 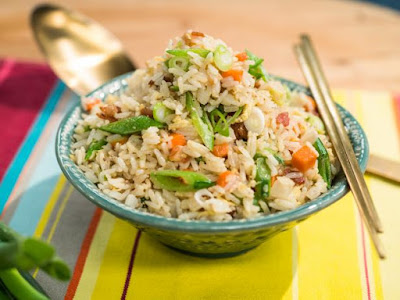 I am a big proponent of rice for breakfast. In fact, one of my favorite comfort dishes is a simple combo of white rice, runny fried eggs and a little salt and pepper. It might sound a bit unusual, but is it really so different than eating toast in the morning? They’re both carb-y, delicious and easy to cook, which sounds like a win in my book.

Don’t just take my word for it, though. If you want to switch up your breakfast by cooking with rice, look no further than Jet Tila’s Bacon and Egg Fried Rice class on the Food Network Kitchen app. Jet’s five-star fried rice is all about comforting flavor, which he develops in stages as he cooks bacon, a few veggies, rice and eggs. It’s a dish Jet learned to cook with his grandmother when he was three years old, and one he still loves to this day.

Though this recipe is quick and easy, Jet has a few tricks up his sleeve to make it even simpler. To start, Jet suggests that if you don’t have rice on hand (or just aren’t the best at making it), call up your local Asian restaurant and ask for a dollar or two of fried rice. As Jet says, “The secret to really great fried rice is perfectly textured, fully-grained rice. And who makes rice the best? The people who do it by the 25-pound or 50-pound per day.”

Next, Jet emphasizes the importance of letting bacon cook undisturbed. He says the bacon will sear and eventually lift from the pan on its own —and if it doesn’t, it’ll stick in little bits that are really easy to scrape up. His final (and most important piece of advice)? Once the rice and eggs are added to the pan, keep tossing to ensure that the rice gets fully coated with the eggs — as Jet explains, the egg will envelop the rice and create a rich and fluffy texture.

Once the rice is cooked, Jet incorporates a few splashes of oyster sauce and soy sauce, leaving you with a perfectly flavored fried rice that’s not too salty or weighted down. Garnish with scallions and white pepper and it’s ready to eat. Full of bacon, eggs (and even a few hidden veggies), this is a morning dish that’s sure to satisfy. We’re willing to bet that once you try it, you’ll never doubt rice for breakfast again.